Unless you’re a powerlifter, it’s a good idea to squat like a weightlifter. That is, with your torso as upright as possible. That way, your quadriceps – the muscle you ultimately want to train – are activated to the maximum.

As a reminder, there are two basic styles of the back squat, namely the high-bar squat and the low-bar squat (aka Olympic squat and power squat respectively ), with the distinguishing feature being the placement of the bar, either higher or lower. on the back.

There is nothing wrong with the power squat. But if you see squatting as an exercise purely for your quadriceps – the muscle at the front of your thigh – it’s better to squat like a weightlifter. The more hip-dominant, and therefore more horizontal, power squat puts more strain on your glutes. More rear, less thighs.

For weightlifters, the ‘other’ squat, the high-bar squat, is the standard squat. The bar does not rest on the back shoulders, but on the upper stairs. The result is a much more vertical movement. 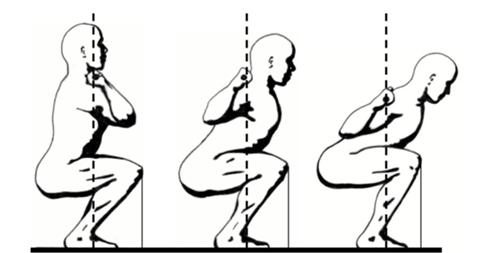 We assume the general squat technique as known. If not, see our main article about the high-bar back squat.

Bodybuilders also usually do the high-bar squat, but with the torso often less upright than weightlifters do. However, if you, as a bodybuilder, want thick thighs and therefore want to train your quadriceps optimally, a squat style that is as vertical as possible is recommended: squat like a weightlifter.

With this squat style you have to accept that you can use a little less weight, especially in the beginning. But even if the absolute load is less, the relative load on your quadriceps is a lot higher, which certainly benefits their development.

The advice to squat like a weightlifter is easier said than done and learning the technique doesn’t happen overnight. We recommend the following four exercises to master the technique. Do this consistently before your back squat and you will gradually learn to squat ‘differently’.

Wall squats, or wall squats, are squats performed against a vertical surface such as a (smooth) wall or door. The support allows you to perform the squat with a fully vertical torso.

Mind you, we are talking about a dynamic wall squat, not the static variant where you sit still and try to hold that position for a certain time.

Overhead squats, where you hold the barbell above you with outstretched arms, will probably confront you with your limited flexibility and ergo mobility. It is better not to perform them with a barbell in the beginning, but with a broomstick, or better yet: a piece of flexible PVC pipe or power bands. Overhead squats mainly teach you to keep your spine (spine) in a neutral position and not to arch your lower back. A common problem when people switch to the high-bar squat.

It is best to do this exercise only with a barbell. After all, it’s about learning technique, not about weight. You perform this front squat with your arms extended straight in front of you, that is, horizontal or even slightly beyond parallel. This puts your center of gravity even further forward than with a regular front squat and you can perform the squat more upright.

The third step on the way to a weightlifting squat is “regular” front squats. Weightlifters do a lot of front squats because this squat is part of the clean and jerk, one of the two parts of weightlifting. The front squat requires a vertical torso position and if you do this exercise often enough, your back squat will become more vertical ‘by itself’.

Finally, we would like to mention that when squatting it is important to keep your spine in a neutral position and not to arch your lower back. This so-called ‘butt wink’, basically tilting your pelvis back, creates the illusion that you are squatting deeper, when in fact it is a performance error.

Film yourself squatting and see when this happens. This helps you become aware of your butt wink and teaches you to squat up to the point where this phenomenon occurs and no further, slightly beyond parallel for most people. Don’t worry, you’ll learn to squat deeper over time.

If you want to speed up this process, it’s a good idea to spend some time each day squatting instead of sitting. For example, while watching TV.

Because modern humans spend a lot of time sitting, we have limited flexibility, which is painfully exposed when squatting. Want to squat deeper? Squat more often!