4 ways to measure your fat percentage

Your body fat percentage is a much better indicator of your fitness and health than your weight or your Body Mass Index (BMI). After all, your scale and the BMI index do not know the difference between muscle and fat tissue, so that people with relatively much muscle mass are often incorrectly classified as ‘overweight’. But what exactly is a healthy fat percentage? And how exactly do you measure your fat percentage?

Fat has become the enemy, but the fact is that you need a certain percentage of body fat. First of all, it’s so-called “essential body fat,” fat you need to stay alive and be active. For men that percentage is about 5%, for women 15% – percentages that are only found in top athletes. In addition, you still need a certain amount of fat reserves for the protection of vital organs.

People with a higher than healthy fat percentage are more likely to have high cholesterol, high blood pressure, cardiovascular disease, diabetes, certain cancers and other conditions. Here too the following applies: to measure is to know.

See here what bodies can look like with a certain fat percentage. ‘Can’, because this is very personal. Some men already have visible abs at 15% fat, others have to dive below 10% for that. 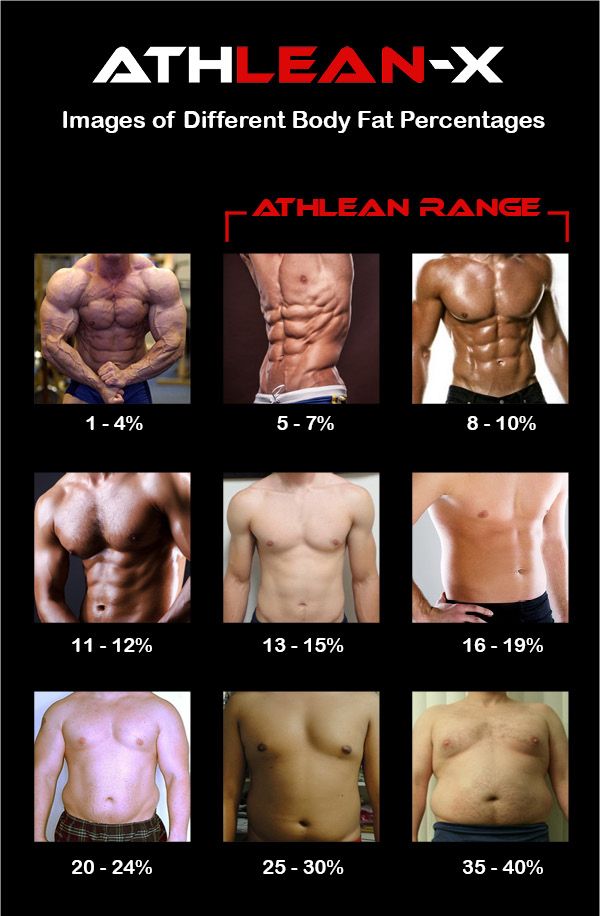 There are several practical ways to measure your body fat percentage. Well, ‘measure’. Most ways are actually predictions, because they put one or more indicators into an equation and the outcome is in fact a more or less precise estimate.

The skinfold measurement is such an estimate, albeit fairly accurate. The thickness of the skin fold is measured at a few standard points with special forceps. Those spots are your biceps, triceps, just below the shoulder blade and near your abdomen. The measurements are put into an equation that results in a fairly reliable estimate of your body fat percentage.

The accuracy of a skinfold measurement depends on the distribution of body fat, which varies from person to person, and on the person performing the measurement. After all, exerting too much or too little pressure on the pliers results in a lower or higher measurement and thus an estimate of the fat percentage that is too low or too high. It is therefore best to have a skin fold measurement performed in a (sports) medical center or in one of the better gyms. In such a case, the deviation is at most 2 to 3 percent.

Would you rather do it yourself? Then take into account a larger deviation: up to 5 percent. Skinfold meters are widely available online. With some instructions that you find on the internet and a conversion table you can estimate your fat percentage yourself. Another option is an electronic skinfold monitor. You enter your gender, age and weight, you measure the skin fold thicknesses at the relevant (usually three) points of your body, after which the device immediately shows your fat percentage on the display. Repeat this a few times and take the average as an indicator of your current fat percentage.

The skinfold measurement is, certainly for bodybuilders, probably by far the best method to measure the body fat percentage yourself. Yet this method is rapidly losing ground to Tanita’s BIA method.

The Bioelectric Impedance Analysis method (BIA method) is a simple, relatively cheap and reasonably accurate way to measure your body fat percentage. Two electrodes are placed on the body: one on your wrist and one on your ankle. Then an imperceptible current is sent through your body from one electrode to the other and the resistance between those two electrodes is measured. Because muscle mass is a relatively good and fat mass a relatively poor conductor of electricity, the percentage of fat can be derived from that resistance (via an equation that also takes into account variables such as body size and gender. The moisture present in the body acts as a conductor for this current signal.

A modern variant of the traditional BIA method is Tanita’s BIA method, in which you only have to stand with your feet on two electrodes and you can read your fat percentage on the display in a few seconds. Tanita’s BIA method has resulted in the so-called commercial Tanita scale, the well-known scale that tells you something about your body composition in addition to your weight.

Original Tanita scales and clones thereof can now be found in almost every household. The price of consumer scales that predict your body composition is between € 20 and € 200. You can often synchronize these devices with an app on your mobile phone, so that you can easily keep track of the progress of your body composition.

Popular are the very affordable Medisina body analysis scales, which show up as fairly accurate in tests. We also have one at home, but note a very large difference in fat percentage with the skinfold meter (about 5 percent!).

Professional, medically validated scales that you find in many gyms are many times more expensive (> € 2,000) and provide a more accurate prediction. These scales have margins of error of 1-5+% and are therefore better suited for monitoring fluctuations in your body fat percentage than an accurate prediction of them. Then we assume for the sake of convenience that the margin of error is always the same.

If you have your own scale, always weigh yourself at the same time and under the same conditions as much as possible. For a somewhat accurate picture it is important that you have a normal fluid balance. In other words:

Even with these tips, you should still allow for quite a larger margin of error (>5%).

There are various calculators available online that derive your body fat percentage from your age, weight and the measurements of, for example, your neck, waist and hip. All you need to have at home is a (normal) personal scale and a tape measure.

A commonly used and fairly accurate calculation is the US Navy equation, which according to some sources could deviate by at most 1 to 3 percent. All you have to do is measure the circumference of your neck and that of your waist, at the height of the navel. Keep your stomach relaxed, so don’t pull in, but don’t push out either. Women should also include the circumference of the hips in the calculation. 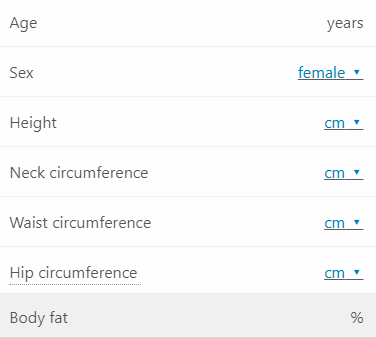 In addition, there are many websites where you can calculate your BMI and people often derive their fat percentage from that. However, this ‘method’ is far from accurate, especially for bodybuilders, because it does not take into account people who have above average muscle mass.

A body scan using DEXA (dual-energy x-ray absorptiometry) technology is one of the most accurate methods of measuring your body composition. The technique uses radiation and was originally intended to measure bone density. Because fat tissue has a different permeability than muscle tissue, you can also get a good idea of ​​the proportion of fat in the total body weight.

A DEXA scan measures the fat percentages per region of the body (arms, legs, buttocks, abdomen, etc.), so that you also get a leg picture of how the fat is distributed in your body. After all, the distribution of body fat differs from person to person.

DEXA scans can only be performed in hospitals and with some physiotherapists. Usually such a scan will cost you at least 50 to 100 euros. Because there is radiation (in small doses) it is not recommended to do more than four scans per year.

Also accurate, but less conventional methods for measuring your body fat percentage are hydrostatic weighing (underwater weighing) and plethysmography (air displacement). However, by far the most accurate method is autopsy. But, for reasons of our own, we will not consider them further.