Anatomy A brief introduction to your most important muscles

A basic understanding of the structure and function of your most important (skeletal) muscles will help you train better. Firstly, you know which exercise to do for a certain muscle group, and you can put together a balanced training schedule yourself. Second, it helps you perform the exercise better. Mandatory reading for every beginner.

When you open an anatomy book or medical encyclopedia, you are confronted with the Latin names of your muscles. Your pectoralis major is your pectoralis major and your latissimus dorsi is your broad back muscle. Formally speaking, ‘musculus’ should even be in front of this. For the sake of comprehensibility and readability of this article, after the introduction of the Latin and English names, we usually use the popular Anglo-Saxon name: your pecs are your pectoral muscles and your lats your broad back muscle. If we’re not consistent in the name, forgive us. We also avoided anatomical terms such as abduction and adduction, flexion and extension, etc. Instead, we have described these movements in more everyday language and illustrated them with an example. 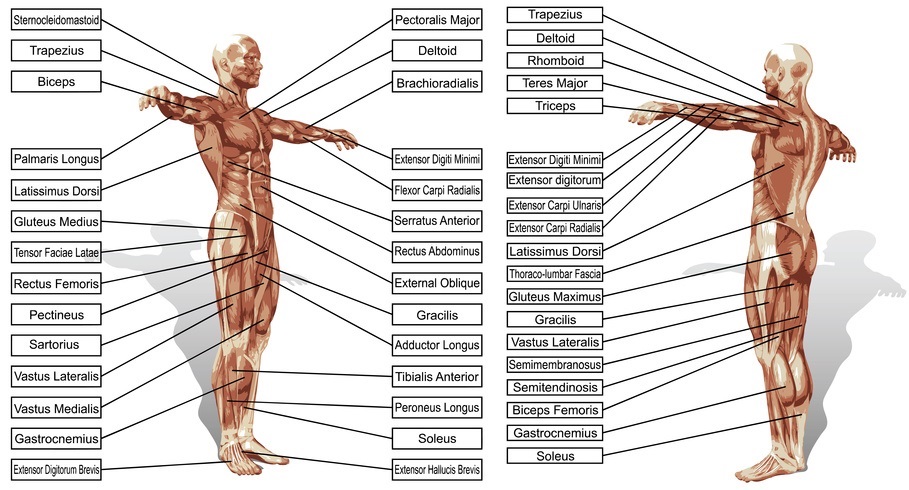 The shoulder muscles are responsible for the movement of your (upper) arm. We couldn’t say it any simpler. Although they do get a little help from your triceps. You can never really isolate your shoulders, like your biceps, because whatever exercise you do for your shoulders, they always get some help from the muscles in your upper back, chest and as mentioned your upper arm. Your shoulder joint is a complex anatomical whole and can move your arm in many directions. It is also a joint that is particularly prone to injury and wear and tear, and you should not use heavy weights for certain shoulder exercises.

The largest muscle group in your shoulder joint is your deltoid (‘delts’). These enclose your entire shoulder joint and continue over your upper arm. Your delts are made up of three heads: an anterior (anterior), middle (lateral) and posterior (posterior) shoulder head, each of which is responsible for moving your arm in a different direction. The front head lifts your arm forward, the middle one moves your arm up to the side and the rear one moves your arm back. A good exercise for the front head is shoulder press, for the middle head lateral raises, and for the back head rear delt rows or flyes.

The upper arm muscles are responsible for bending and extending the elbow. Your upper arms play a role in training every muscle group in your upper body, and they take a beating on compound exercises like bench presses and dumbbell rows. This makes it possible to develop considerable arm muscles without specifically training them.

The biceps brachiiare located on the front of your upper arm and consist of two (bi means ‘two’) heads: the long head, on the outside, and the short head, on the inside. When it is said in everyday language that someone has strong muscles, it usually refers to the biceps. The biceps are responsible for bending your elbow. By placing your hands closer to or further apart during exercises such as biceps curls and pullups, you emphasize the long and short head respectively.

The triceps brachiiare located on the back of your upper arm and consist of three (tri means ‘three’) heads: a long head, on the inside, a lateral head, on the outside, and a medial head, in line with the long head. The triceps are responsible for extending your elbow. If well developed, they have the shape of a horseshoe. It is not possible to isolate one of the heads, but in certain exercises the proportion of one head is greater than the other. For example, exercises with an overhand grip emphasize the lateral head and with a neutral grip on the long head. Good exercises for your triceps include narrow bench presses, triceps dips, and lying triceps extensions.

The brachialis is located under your biceps and helps it bend your elbow. If well developed, they push your biceps up slightly. You can train the brachialis by changing your underhand grip on your curls to a neutral or overhand grip.

The most successful bodybuilders of the past twenty years, Dorian Yates and Ronnie Coleman, were known for it: their broad and thick backs. The “problem” with training your back is, firstly, that you don’t see your back muscles, and secondly, that your back gets help from the biceps when it performs its tasks, which tend to take over. The two largest muscles in your (upper) back are the latissimus dorsi and trapezius, the only two worth discussing from a training perspective.

The latissimus dorsi (“lats”), or broad back muscle, is the largest muscle in your back and torso, running on either side of your spine from your armpit toward your waist. Although one large muscle, your lats are made up of four parts with different functions. The main function is to pull the arms backwards and (from a raised position) downwards, as in seated cable rowing and pulldowns respectively. The lats receive help from the large round arm muscle (teres major). Because of their size and different functions, it’s a matter of ‘bombing’ your lats with an arsenal of horizontal and vertical pulls and different grips – wide and narrow, overhand, underhand and neutral.

The trapezius (“traps”), or trapezius, is a diamond-shaped muscle that runs from your neck to the middle of your back. The traps are divided into three regions – the upper, middle and lower fibers – each with its own function, namely moving your shoulder blades up, back and down respectively. Provided you squeeze your shoulder blades together at the end of the move, back exercises like seated cable rows and pulldowns train your traps—your middle and bottom fibers to be exact. You can also target your middle and lower fibers by squeezing your shoulder blades together during cable rows and pulldowns with outstretched arms. You train the upper fibers with the well-known shrugs or by rowing upwards with a narrow grip.

De pectorals are arguably the most overtrained muscles in the gym. While much smaller than, say, your lats, the pectoralis major is bombarded with just as many exercises and sets. Possible consequences are an imbalance in strength and incorrect posture. While your back muscles get help from your biceps in performing their tasks, your chest gets help from the triceps.

Your pectoralis major (“pecs”), or pectoralis major, is located on either side of your sternum and consists of an upper and (larger) middle section. The addition ‘big’ suggests that there is also a small pectoral muscle, and it is true; the pectoralis minor (pectoralis minor) is behind its big brother. The pectoralis major has four functions, the main one being the movement of your upper arm from the outside in, such as with the bench press or even more clearly with flyes. For all-round breast development it is important to target both the upper and middle part and to perform exercises from different angles.

By your waist we mean both your belly and your lower back. In short, they ensure that you can bend and stretch your torso, but also that you can stand upright at all. The muscles in your abdomen and lower back play a vital, stabilizing role in compound exercises like the squat and deadlift . But they also support your torso during lighter exercises such as biceps curls and standing triceps stretches.

The rectus abdominis (abs), or rectus abdominal muscle, is a segmented muscle that runs from the sternum to the pubic bone. The muscle consists of an upper part, which is above the navel, and a lower part, below it. The (usually) three or four horizontal tendons cause the so-called washboard. Usually the term “washboard” refers to the six visible segments of the upper abs, the coveted six-pack. But in principle an eight and even ten pack is also possible. The rectus abdominis flexes the torso by pulling the rib cage toward your pelvis or vice versa.

The obliquus abdominis (obliques), or obliques, are located on either side of your rectus abdominis and run from the lower ribs to the pubic area. The obliques actually consist of two ‘layers’: the internal obliques and transversely, with the muscle fibers in the opposite direction, the superficial external obliques. The obliques are mainly responsible for twisting and flexing the trunk sideways. You can train the obliques with twisting crunches, side crunches and side bends.

The erector spinae, or long straight back muscle, is a three-headed muscle group that runs on either side of your spine, from your sacrum to your neck. The main task of this muscle group is to prop up the spine and extend the trunk from a flexed position. A strong erector spinae is indispensable for a strong deadlift and also plays an important role in preventing back injuries and reducing back pain. In addition to conventional deadlifts, this muscle group can be trained with straight leg deadlifts and hyperextensions.

The glutaeus maximus (“glutes”), or large gluteal muscle, is the largest of your three glutes – the others being the double-headed glutaeus medius and the glutaeus minimus – as well as the largest muscle in your body. He has to, because he performs some of the toughest tasks. Only the gluteal muscle moves the extended thigh backward, but it also plays an important role in hip-dominant exercises such as the deadlift, where it gets help from the hamstrings and erector spinae. The best exercises for for the glutes can be found here.

The quadriceps femoris (“quads”), or four-headed thigh muscle, is a four-headed muscle on the front of your leg. The middle head is called the rectus femoris. It is flanked by the vastus lateralis on the outside and the vastus medialis on the inside of your leg. Finally, the vastus intermedius is hidden behind the rectus femoris. Together, these muscles are responsible for extending your leg. They play an important role in knee-dominant exercises such as the squat and are specifically trained with leg extensions. It is a myth that the quadriceps have to work harder with front squats than with back squats.

The hamstrings (‘hams’) are a group of three muscles on the back of your leg. These are: the two-headed biceps femoris, on the outside, and the semitendinosus and semimembranosus, on the inside. Together they ensure the bending of your leg. They play a role in hip-dominant exercises such as the deadlift and are specifically trained with leg bends (leg curls). By turning your feet slightly outward during the squat and deadlift, you emphasize the (larger and stronger) biceps femoris. Now you also know what this advice is based on.

Your calves are located at the back of your lower leg and are made up of two muscles: the superficial gastrocnemius and (partially) below it the smaller soleus. The gastrocnemius consists of two heads: the medial head, on the inside, and the lateral head, on the outside. The main function of the calf muscles is to extend your foot, as in calf raises. Good to know: your calves are the only muscles in your body that have a non-random mix of fast and slow muscle fibers – they contain relatively many slow muscle fibers. It is therefore best to train them with many repetitions.