The debate about training volume still prevails. This is partly because this training variable is difficult to research in practice. A recent study, however, manages to imitate the practice quite well. Read below how the study was set up and of course what the findings are.

We are talking about a study by Dellatolla et al. from November last year. As mentioned, one of the many studies into training volume among strength athletes, but for several reasons one that stands out positively in terms of design.

The study involved 9 strength athletes who completed a training program for the legs (quadriceps and hamstrings) for a period of 6 weeks. One part of the subjects trained with a relatively low volume, evolving from 5 to 9 working sets (hamstrings) and 10 to 14 working sets (quadriceps), the other part used a high volume, namely 11-18 sets and 19-28 sets respectively.

Why is this study ‘better’ (read: more realistic) than many other studies into training volume?

After 6 weeks of a total of 18 brutal leg days, the high volume group recorded the best results. Compared to the low volume groups, they were much stronger on the squat and on the stiff-leg deadlift (not on the leg press, by the way).

But for us bodybuilders much more important: the high volume group, according to all measurements, built considerably more muscle mass than the low volume group. See figure below. 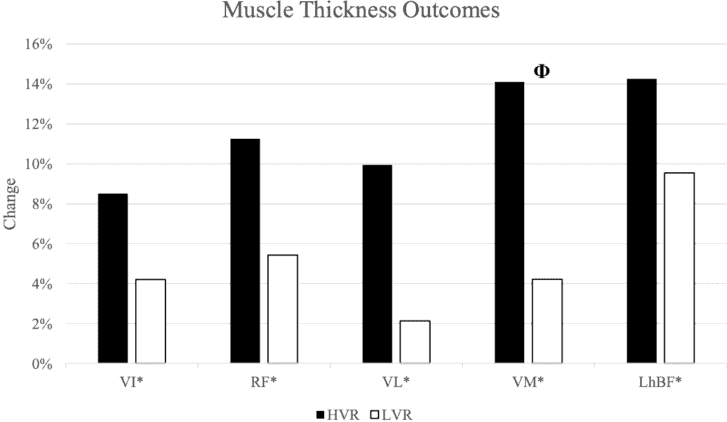 Based on this one study, against the light of the already existing literature, we can cautiously draw some conclusions:

In short: if you want fast(er) muscle growth, do more sets, provided you can recover from them.

The devil often lies in that ‘if’. This usually requires a high training frequency, so that, for example, you only do a maximum of 5 sets per muscle group per training. But of course your agenda and motivation have to allow that. Although that motivation is fine, we assume.