Should you train to failure?

1.   Training to muscle failure means that you train a set until you think you can no longer do a decent repetition (volitional failure) or until you cannot complete a repetition and thus literally fail (momentary failure).

2.   The extent to which you train to muscle failure is usually expressed in reps in reserve (RIR). 1 RIR means that you stop the set when you could do one more repetition.

3.   Most reputable coaches believe that failure training should be dosed to avoid overtraining. Achieving muscle failure causes a great, perhaps disproportionately great fatigue of the muscle. This can be at the expense of your recovery, which means that you can do less productive sets.

4.   As a beginner, you can safely stay away from muscle failure (1-3 RIR): consistent training and correct execution of exercises are your most important training pillars. As an intermediate you usually train close to muscle failure, but not completely: you use 1-2 RIR. As an advanced lifter you also train some sets until muscle failure, albeit only with isolation exercises and only in the last set of an exercise.

5.   Beginners but also advanced lifters often have trouble estimating the right number of RIR. To that end, it helps to train to muscle failure every now and then, so that you experience firsthand what it is.

WHAT (REAL) MUSCLE FAILURE IS

If you try to do as many reps as possible in a set, sooner or later there will come a point where you can’t go any further: with the best will in the world you won’t be able to squeeze out another full rep. In short, you have reached the point of muscle failure. That’s the point at which the muscle is so fatigued that it can no longer provide the strength to complete a rep (decent!).

Please note: this concerns muscle fatigue, also known as local or peripheral fatigue. Sometimes you have to end a set because you are fatigued in a different way, namely central and/or cardiovascular, something that often occurs with very long sets. However, that is different from achieving muscle failure.

By ‘training to muscle failure’ we mean that you train until you are sure that you can no longer do a repetition (volitional failure), or until you literally fail during the concentric phase of a repetition, for example while raising the barbell at a biceps curl (momentary failure).

The video below shows you what real muscle failure is. That point may be a few reps further than you think, no matter how uncomfortable the set may feel.

The degree to which you train until muscle failure, also called relative intensity, is usually expressed in Reps In Reserve (RIR). For example, 1 RIR means that you stop the set when you could do one more repetition.

To grow a muscle group, you have to load it with enough ‘stimulating repetitions‘ for a certain period of time (usually we assume a week). Those are the reps in your sets closest to the point of muscle failure. ‘Stimulating’ means that these reps deliver significant growth stimuli. You can recognize these repetitions by the fact that they are more difficult and therefore slower than the repetitions at the beginning of your set.

Normally, a set should contain at least five of those stimulating reps. This is best achieved by training your sets in the range of 6 to 15 repetitions (for practical reasons the best rep range for muscle growth), always close to muscle failure. So suppose you’re using a weight that allows you to complete 12 reps, there’s little point in doing just 6: it’s not until about the seventh rep that the reps start generating serious growth incentives. Only with heavy compound exercises, such as the barbell squat, are the ‘early’ reps in your sets already quite stimulating.

When it comes to muscle growth, more is better. For every stimulus there is also fatigue. We have already seen that there are different types of fatigue: central fatigue (in the central nervous system), cardiovascular fatigue (in the heart) and peripheral, or local fatigue (in the muscle).

Therefore, always aim for the most favorable Stimulus Fatigue Ratio (SFR) in your training: as much growth stimulus as possible against as little fatigue as possible.

Do you have to train your sets, for optimal muscle growth, to the point of muscle failure? Or is it better to stay a bit away from that, by leaving a few reps ‘in the tank’ (ie by training with Reps In Reserve)? The answer to these questions is not so simple and certainly not black and white: training to muscle failure is perhaps the most controversial topic in natural bodybuilding.

Proponents of failure training say that you will only grow to the maximum if you also give the maximum in your sets, meaning you train them to muscle failure. This view stems from bro sience, based on older scientific studies. But according to coach Layne Norton, most of these studies did not equate volume between failure & non-failure groups with the failure groups getting in a significantly greater training volume during the studies. .

Subsequent studies assumed equal training volume and showed that training from near-failure produced the same muscle gains as training to failure when the volume was equal. Norton cites the following studies: 33343066 , 29577974 , 28713535 and 31809457. In other words, you don’t have to go all the way for optimal muscle gain.

In fact, training to muscle failure can even be detrimental. According to opponents, training until muscle failure causes disproportionate fatigue, which is at the expense of your recovery capacity and thus of the quality of the rest of your training(s).

Another argument against training to muscle failure is that it promotes poor technique and thus injuries.

In a meta study (2020), hypertrophy expert Brad Schoenfeld tries to find an answer through an analysis of 15 scientific studies, all conducted among young adults.

On the other hand, training to muscle failure does not appear to be detrimental to muscle growth, at least not in the short term. It should also be noted that long-term studies in the field of bodybuilding are scarce and it cannot therefore be ruled out that failure training eventually leads to overtraining. There is some evidence for that.

A second meta-analysis (2021) also shows that it is better to stay away from muscle failure. Based on twenty relevant studies, the authors conclude that the training stimulus is counterbalanced by a relatively high level of fatigue. Training to muscle failure significantly increases muscle damage and thus recovery time, neuromuscular fatigue and metabolic disruption. This compared to training with RIR, but with the same number of repetitions in total.

A third study, a scoping review of 38 studies, argues that training to muscle failure is probably not superior to no failure to maximize hypertrophy. The optimal proximity of strength training failure for muscle growth is unclear and may be moderated by other training variables, such as absolute intensity and training volume. Also, training to failure is likely to cause greater neuromuscular fatigue, muscle damage and perceived discomfort than training to failure does.

Finally, there is a fourth meta-analysis, again by Brad Schoenfeld and others, based on fifteen studies. The review concludes that training to muscle failure is not a prerequisite for optimal muscle growth. However, it does not appear to have any adverse effects either. More research is needed to determine the long-term effects of failure training.

WHAT PRACTICE TEACHES US

Of course, science isn’t everything. The practical experience of renowned bodybuilding coaches such as Mike Israetel, Eric Helms, Steve Hall, Menno Henselmans, and Sean Nalewanyj may weigh just as much. And these coaches all believe that failure training should be done in moderation to avoid disproportionate fatigue — the adverse SFR we talked about.

The figure below clarifies this and suggests that as a rule you should train with 1-3 RIR and that you only apply failure training in moderation. The 0 RIR stands for volitional failure, -1 RIR for momentary failure. 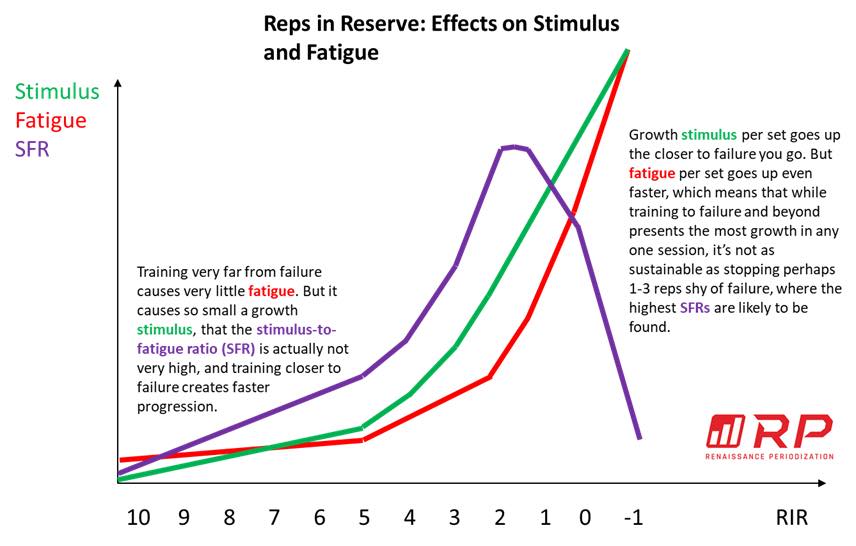 According to Schoenfeld, this issue is mainly about the nuances:

There are a number of limitations to the current body of literature that impair the ability to draw strong conclusions on the matter, and various factors must be considered from a programming standpoint.

According to Menno Henselmans, training to muscle failure can be especially useful in these situations: to experience what muscle failure is so that you can better estimate your RIR, or to create maximum growth stimulus when you have little time to train but sufficient recovery time (such as with High Intensity Training).

Should you train to muscle failure or not? Fortunately, you don’t have to choose. After all, real life is not a scientific study in which one half only trains until muscle failure and the other half never. What matters is that you apply failure training with some policy.

In principle, training to muscle failure is not necessary to achieve maximum gains . In fact, it’s better to keep a few reps “in the tank” to avoid disproportionate fatigue. Therefore, train on average with 1-3 RIR.

Natural bodybuilding is all about training smart and that is not necessarily the same as training as hard as possible. Training to muscle failure must be done carefully, and therefore in a dosed manner. Referring to the figure below: you train at least ‘Hard’, sometimes ‘Hard AF’ and occasionally to ‘Failure’: