How much muscle can you gain at most? As a natural

It’s a question that is often answered far too positively in most bodybuilding magazines and supplement advertisements: how much muscle mass can you, as a natural, gain in a month, a year, a lifetime?

1.   A male natural bodybuilder can gain a maximum of 10 to 18 kg of muscle mass in his life through strength training (on average 13 kg). The exact amount depends on body type and other genetic conditions.

2.   In the first two years of your training career, you can already achieve about 75% of your muscle growth potential, if you continuously train according to a well-designed program. After three years you are already at 85% to 90% of your genetic potential. In reality it usually takes much longer.

THE LIFE OF A NATURAL BODYBUILDER

In this article we assume that you are a natural bodybuilder and therefore only use ‘aids’ that are available legally and without a doctor’s prescription. In that case you should know that the possibilities in this sport are relatively limited: on the one hand in terms of performance and recovery, on the other hand in terms of muscle growth that you can achieve.

As a natural, your genetic ceiling is your upper limit. Although you will never reach that ceiling in practice [ ix ] , this means that you have usually reached your potential after a few years of (optimal) training.

The use of steroids in bodybuilding has created a rather murky picture of what is possible in this sport, of course, without ‘means’. Perhaps you envision a physique that extends far beyond your genetic capabilities. And maybe your great example in bodybuilding is an avid steroids user, who throws sand in your eyes with his adoration for rice, chicken and broccoli.

BODY TYPE AS A STARTING POINT

The physique you can achieve as a bodybuilder depends first and foremost on your ‘basic’ physique and the associated genetic conditions.

From science we can distinguish different body types (somatotypes). A classic and still accurate classification is that of ecto-, meso- and endomorph, even though it actually stems from psychology. The disadvantage of this classification is that people are not always one of these types, but often an intermediate form.

Gruber and colleagues developed another system for determining body types in 2000, the Fat-Free Mass Index (FFMI) [ x ] . Their guidelines for men, expressed in kg/m2, are as follows:

You can in principle only determine what your ‘original’ body is when you are fully grown, or at least only after you have entered puberty for a number of years.

As an adolescent, are you or were you skinny, with relatively little muscle mass and muscles that are long in shape? Can or could you eat a lot without gaining (a lot) of weight? Then you are probably an ectopmorph, or you fall in the FFMI index of the light built. You can really build up a decent amount of muscle mass, but it will be relatively difficult or slow. In addition, remember that you originally have little muscle mass. You therefore have to build a large part of your physique yourself, so that the end result may be less spectacular than you hoped for. In the FFMI index, you probably won’t get past 20-22.

Meso- and endomorphs can build muscle more easily and already have more muscle mass. So, even as naturals, they can grow quite large through strength training (22-25 or maybe even higher in the FFMI index). It will take them more effort to also stay lean, something that makes the ‘ecto’ easier.

The fact that some peers are much more muscular than you, even if they don’t or hardly train, is often purely a matter of genetics. Which is not to say that as a signed ectomorph you should despair. Perhaps you can still be very muscled, depending on how much you deviate from the genetic average.

How much muscle mass you build and in what time frame, of course, also depends on your efforts to do so.

First and foremost, there has to be complete dedication. It’s not that your whole life has to be devoted to bodybuilding, but you will have to train with discipline and watch your diet. Good sleep and a healthy lifestyle in general are also important.

But even then you probably won’t constantly get the optimal return from your workouts. Bodybuilding isn’t complicated, but programming your workout efficiently does require quite a lot of knowledge and experience – especially if you’re past the beginner stage and muscle gains are getting harder and harder. Many bodybuilders end up on their first strength plateau and sometimes stay there for years. Also, injuries can throw a spanner in the works.

Purely for convenience, we always assume optimal conditions in terms of training and lifestyle in this article. In practice this will never be the case, it will therefore take longer to build up muscle mass than the theoretical models present us.

THE PRINCIPLE OF DIMINISHED RETURNS

As a newbie to the gym you will find that you can achieve muscle growth quite easily and quickly, even if your training is still anything but optimal. The body of an advanced strength athlete is adapted to the toughest training conditions, while that of a newbie will experience even the smallest training stimulus as ‘new’ and therefore as a growth stimulus.

Making progress means that our body has to constantly adapt to greater and heavier training loads (adaptation). Although your muscles can continue to adapt fairly quickly, your bones, joints, tendons and nervous system cannot. Constantly adding new weight is therefore not possible: sooner or later you will end up on a strength plateau.

The principle of diminished or diminishing returns therefore applies to more advanced bodybuilders: much more is needed to make progress and that progression is also much less great. 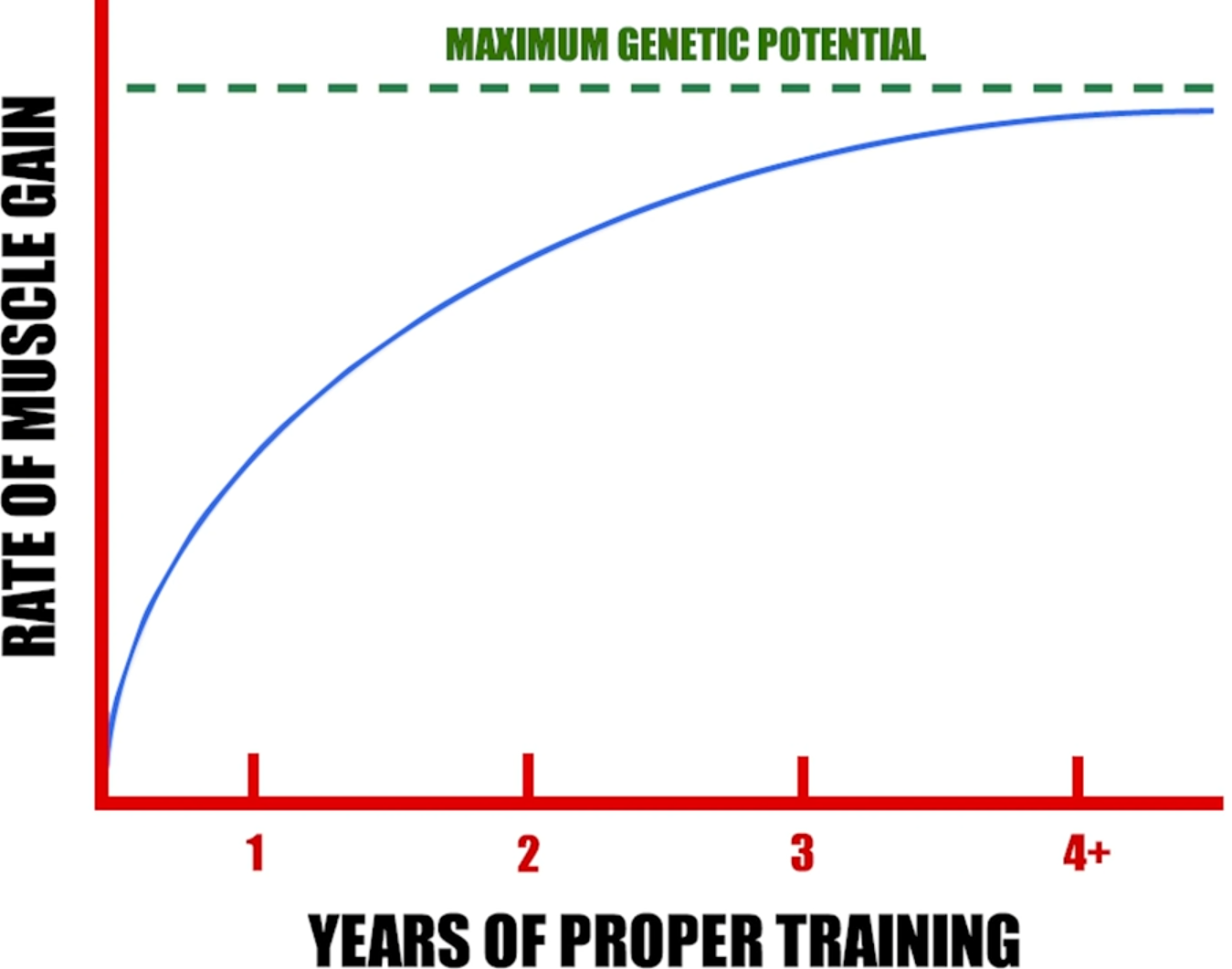 Although predicting muscle growth is and remains difficult, thanks to the work of a few scientists we can provide some (rough) guidelines.

The most complex, and perhaps most reliable model for predicting muscle growth is that of natural bodybuilder Casey Butt, who collected ankle and wrist measurements from natural bodybuilders between 1947 and 2009. He developed a calculator that calculates maximum muscle potential based on height, ankle and wrist size, combined with the body fat percentage. But then you have to have these numbers ready.

Based on literature studies and anecdotal evidence, author Lyle McDonald developed a simpler model [ ii ] , which predicts the next annual growth potential.

Yes, you read that right: after four years of serious training, you will only gain a maximum of one kilogram of lean muscle mass per year. Again, assuming you’ve trained optimally all these years.

Researcher and fitness consultant Alan Aragon, partly on the basis of data from his own practice, came up with a model that translates the muscle growth potential into the training level: beginner, intermediate and advanced [ i ] .

Below is the Alan Aragon model for men. Women can easily divide the percentages and numbers that follow by two to get a rough idea of ​​the progress they can expect.

What we see at work above is the principle of diminished returns mentioned earlier. In other words, you will have to work harder and harder, while getting less and less in return.

Finally, the “No Bullshit Formula” by coach and author Martin Berkhan, which he based on his observations of natural bodybuilders in competition, so with fat percentages around 4-5% in men [ xi ] . His calculation is:

height in cm – 100 = maximum weight in kg, in competition form

The results of this formula would roughly correspond to the more complex of Casey Butt [ xii ] . Nevertheless, we feel it is very general, because height does not necessarily say anything about body type (ecto, meso or endo).

A male natural bodybuilder can gain a maximum of 10 to 18 kg of muscle mass in his life through strength training (on average 13 kg). The exact amount depends on body type and other genetic conditions.

In the first two years of your training career, you can already achieve about 75% of your muscle growth potential, if you continuously train according to a well-designed program. After three years you are already at 85% to 90% of your genetic potential. In reality it usually takes much longer.