The name Brad Schoenfeld pops up regularly in our bodybuilding articles. After all, this American scientist has been conducting research for many years into how best to train and eat for muscle growth. Thanks to Schoenfeld, a lot of bro science myths have been shattered. Today we hear the hypertrophy expert himself in a very interesting podcast.

Schoenfeld is interviewed by Steve Hall, founder of the coaching platform Revive Stronger. A 50 minute interview may seem boring, but it covers just about all the important things you need to know about muscle growth – science backed!

To save you some time if desired – after all: the weight room is calling – here is a summary of the most important topics from the conversation.

Schoenfeld on his statement:

A majority of maximizing muscle growth – perhaps as much as 70% – is obtained from simply training hard and eating right. The other ~30% is what separates good physiques from great ones.

In other words, even without optimal training, without a well thought-out progression model and without a nutrition plan, you can already make considerable gains— as long as you train regularly and get enough protein and calories. But you probably watch these kinds of videos because you want to belong to that 30%, the “optimalists” who want to reach their full potential. Then it becomes important to delve into themes such as muscle failure, overreaching, progressive overload and so on. When it comes to nutrition, details also become more important.

Not necessarily, says Schoenfeld. If you train some sets to absolute muscle failure during a session, you may get a little extra muscle gain. But most of the muscle growth (say 95%) comes from the sets you do toward muscle failure, without actually achieving muscle failure. So sets where you keep one or two repetitions in the barrel (reps in reserve). Schoenfeld emphasizes that little research has been done on the effects of training to muscle failure.

11:45 – IS OVERREACHING A USEFUL STRATEGY FOR BODYBUILDERS?

(Functional) overreaching is a strategy that has come over from endurance sports, such as running. It means so much that you consciously work towards a slightly too large training load, after which you allow your body to rest for a while by means of deloading. According to Schoenfeld, this is also a very useful method for bodybuilders.

For overreaching, it is best to train in meso cycles (training blocks of, for example, six weeks), in which you gradually increase the training volume. Volume (the number of sets you do weekly) is an important driver of muscle growth. The best way to expand your training volume is to increase your training frequency, so that the volume per session remains within limits. Before you start the ‘peak week’, hold a deload. This way your body can fully recover first. After the peak week, you reduce the volume again to allow supercompensation, the process by which your body arms for the next (too) large training load through muscle growth. Schoenfeld compares overreaching to climbing a steep rock that you just don’t fall off.

Coincidentally, the same Schoenfeld recently published one of the few studies that scientifically demonstrates how to manipulate training volume through functional overreaching and supercompensation. The guidelines resulting from that study are contained in the figure below. 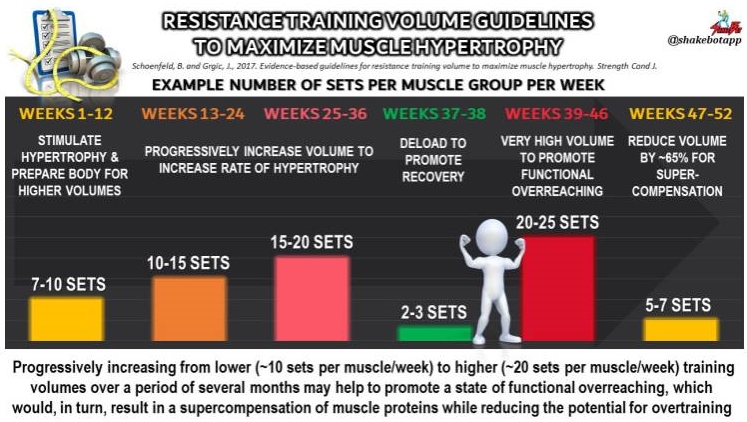 There are no fixed rules for bulking, because calorie needs are very personal. They depend on your body type (ecto, meso, endo) and how hard you train. In addition, the calorie requirement usually increases as you progress in your training cycle: the training load increases and your metabolism probably speeds up, partly because you have gained more mass. Just like your metabolism slows down when you lose weight. Nevertheless, Schoenfeld gives a general guideline for a (c)lean bulk , namely a calorie surplus of 300 to 500 kcal per day.

The amount of muscle mass you can gain during a bulking phase also depends on many variables. But the average natural bodybuilder who has been training for several years can expect 1 pound (450 g) of muscle growth per month, according to Schoenfeld.

Large, complex exercises such as the barbell squat should be almost standard in your training program, according to Schoenfeld. Compound exercises can be performed heavily and are therefore an important driver of muscle growth in your entire body. But also because of their technical complexity, it is important that you keep doing them constantly and regularly. ‘Regularly’, because squatting once a month makes little sense. Then it’s better to do the leg press as standard. With most compound exercises, you can occasionally make minor variations, such as using dumbbells instead of a barbell for the shoulder press, or varying the grip on barbell rows.

With isolation exercises (including machine exercises), you can do different variants, so to speak, on a weekly basis: cable flyes instead of dumbbell flyes, dumbbell curls instead of barbell curls, and so on. Schoenfeld calls these rotation exercises. Because of that many variations, you know for sure that your muscles have been trained from all angles and directions.

36:07 – IS THE DEADLIFT EFFECTIVE FOR MUSCLE GROWTH?

Don’t be alarmed, but Brad Schoenfeld advises bodybuilders to only deadlift during a strength cycle, i.e. a training period in which you mainly focus on strength gain. When muscle growth is the main goal, he prefers to omit the deadlift. Not because it’s such a bad exercise, but because deadlifting is such a test for your central nervous system and total body that the rest of your workout suffers. And possibly your recovery as well. In addition, the deadlift is relatively difficult for an average strength athlete to perform correctly, with all the associated injury risks. In short, the benefits of the deadlift do not outweigh the costs – at least, in terms of pure muscle growth.

Schoenfeld uses and recommends three ways to work towards the point of overreaching discussed earlier :

These and some other questions are discussed in detail in the video.